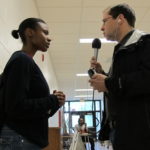 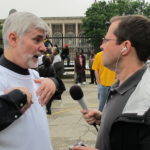 Invisible to the vast public school view of youth sits an extraordinary project in Lawndale called the Peace Warriors. This program was introduced to the community by Lafayette Monroe who marched with Dr. Martin Luther King in the 1960s and was deeply influenced by the non violent examples he practiced. This current, self initiated group of high school students have set out to change the language of violence in one of the toughest neighborhoods in Chicago.

There is a sense that some schools are representing prison preparatory sites as barred windows, industrial colors and durable wall coverings, friendly police presence, metal detectors, security guards and a climate of suspicion demarcates the conditions for meaningful learning. The surroundings are intimidating and the Peace Warriors in a very short, unrealistic time have taken over the school and made the surrounding community safer in the testimonies of their fellow students.

I had the opportunity to sit down and interview a dozen Peace Warriors about their responsibility as a volunteer membership, the depth of administrative support and most importantly, their own sense of satisfaction in contributing to the school’s most important cause. On three different moments in sites both on campus and off, including DePaul University, I spoke with teachers, students and leaders of the school about the Peace Warriors. At a final peace rally at the North Lawndale College Preparatory High School which celebrated 192 days of uninterrupted peace, John Horan, principal and I spoke enthusiastically about the prospects for youth driven change. 193 days earlier, Horan had stopped investing in security and removed the metal detectors at each of the school’s entry ways to the concern of many students.

The Lessons in Courage initiative has afforded me a focused opportunity to begin to sit and speak to the Peace Warriors from outside the gaze of fellow students. The program is volunteer and organized solely from a handful of strong, soft spoken and committed youth. It is their school and in many ways they share that sentiment through our initial conversations, making radical claims that this community can be the most appropriate site to work out their future needs. If the idea for change is to occur in Lawndale it must begin with the young who can model positive behavior in their community. The youth I met and will continue to work with from this point on, feel poised and capable to author high but reasonable expectations of their fellow community members.

I was happy to use a portion of the funds to hire a youth who has been the subject of much abuse to mix and organize the initial interviews. It has made an impact on him and will continue as we move forward throughout the year working with this important group and building a small microwatt radio station in the school for the Peace Warriors to use as a sanctuary to broadcast and communicate through the school a message that change is in the air.