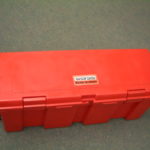 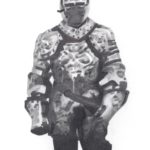 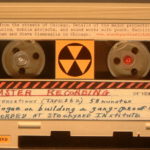 The Binder Archives was a portable exhibition that was designed to travel with the greatest of ease. In Binder Archives, three-ring binders and their European equivalents were used as a mode of presenting large quantities of material and information. For this project, individual artists, exhibition organizers, creative people, archivists, and groups produced binders that they have filled with photographs, drawings, documentation, photocopies, printed ephemera, tactile objects, or any other material that can be punched with three holes and stored in a binder. Each binder is a self-contained project or archive of a person or group’s work. Some of these individual binders contain as much material as one might expect to find in an entire exhibit or a book. Viewers could freely handle the binders just as they might browse through books in a reference library.  The Stockyard Institute contributed the notes and research for designing a gang proof suit to the Binder Archives.